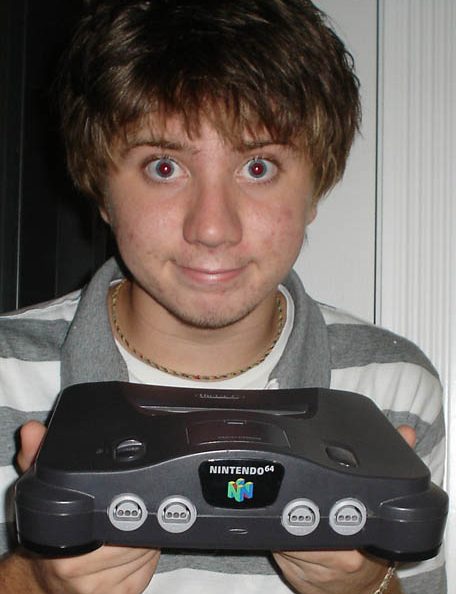 Recently a Mr. Brandon Kuzma decided to sell his Nintendo 64 on eBay, normally this would be no big deal, but this guy happens to be the kid that featured in one of the Internet’s most famous videos — ‘N64 Kid’.

If you don’t know who he is, or what the video is all about, then check it out:

So how did his eBay sale go, why did he sell it, and just how good was that now classic Nintendo system? We reached out to Brandon to find out:

Gamebrit: How and when did the video get uploaded, and did you expect the response it got?

Brandon Kuzma: The video got uploaded sometime in June or July of last year (2005) on my own website, kuzmadv.com. Originally I had showed the video to my girlfriend and she thought it was so funny that I should put it on my site, so I finally gave in (because I didn’t think it was that funny, and people would hate it). Although once it was on my site I put it on a skateboard videography and photo reference forum called Skateperception.

I guess someone from that site put it on YouTube and it exploded. There was something like 260,000 hits in a couple days. I guess thats where people got it from and started the many remakes of it.

Gamebrit: Has anybody recognised you, or has the video ever caused you any embarrassment?

Brandon Kuzma: No, I’m not embarrassed at all. The only time someone recognized me was when I was at a community pool jumping off high dives, that my girlfriend, Aysha, told me that as I was climbing up the ladder that someone said “that kid looks like the N64 kid!“

Gamebrit: As you mentioned in the video way back then, you intended to ‘Rent from Blockbuster’, did you?

Brandon Kuzma: Yes, my parents refused to buy games for a month or two, then gave in.

Gamebrit: What was your favorite game on the N64?

Brandon Kuzma: Probably Tony Hawk Pro Skater, or 007 Goldeneye, they were the only games I ever liked.

Brandon Kuzma: Every once in a while I would play 007 with friends if it was raining, or I would play any of the Tony Hawk Pro Skater series on PS2. But its not that often.

Gamebrit: Why did you decide to sell your Nintendo 64?

Brandon Kuzma: Because so many people were asking me to!

Gamebrit: Did you expect the bids to go as high as they did?

Brandon Kuzma: I didn’t at all!

Gamebrit: So now the auction is over, do you think the highest bidder was a bit stupid bidding as much as they did?

Brandon Kuzma: Well the highest bidder never paid, and none of the other bidders answered my messages actually, I was pretty unhappy, but someone offered me $200 for it, and paid, so i got that much at least. (Which is much more than ‘normal’ N64 consoles go for on eBay)

Gamebrit: What do you do now?

Gamebrit: How was that ‘Racing Car’ in the end?

Brandon Kuzma: Haha, actually it never worked to begin with. The car would turn left when you steer right and visa versa..

Gamebrit would like to thank Brandon Kuzma for taking the time out to answer our questions, and we wish him the best of luck in the future!

This article was originally published on EuroFusion.net