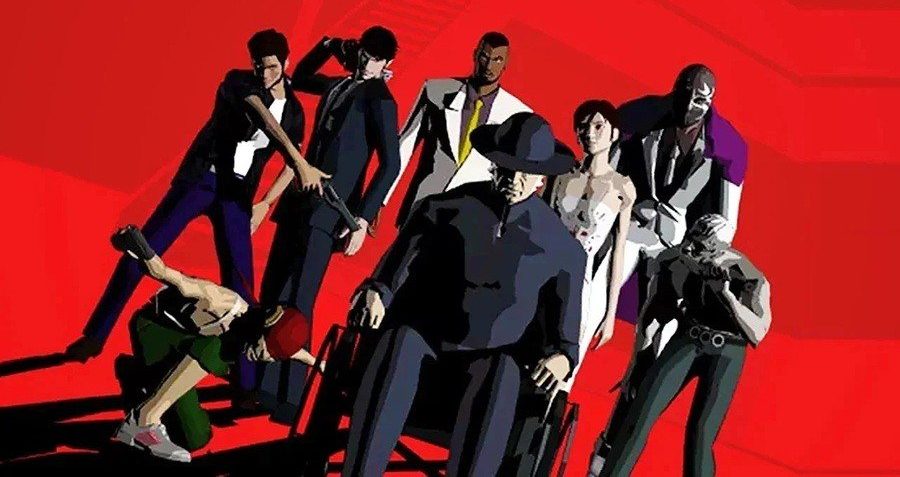 In a market that has become prosaic with character dependant games and sequel games, we would like to take this opportunity to announce five new and exciting games for GameCube.

With these words Hiroki Kato, and his employer Capcom, made quite the splash.

For a company well known for its reliance on (and subsequent bleeding of) established franchises, it marked a turning point in the way one of the industry’s biggest players viewed their output and admitted that something was going very wrong for gaming.

The five games in question were Resident Evil 4, Viewtiful Joe, PN: 03, Dead Pheonix, and finally, Killer 7, all of which shot straight to the top of everyone’s Most Wanted list. Well, all except Dead Pheonix which mysteriously disappeared off the radar, presumably dead.

Now we come to the fourth and seemingly final release, the tremendous Killer 7.

Capcom have certainly saved the best till last, even counting Resident Evil 4, this has to be one of the best games of this generation. Everything from the unique graphical style, to the controls and use of sound make this an incredibly original experience.

Capcom seem to have tried their hardest to make sure this game breaks the mould and they should be applauded in doing so. They’ve created something that strides genres with ease — it’s a light-gun game on rails minus the light gun, a puzzler, and survival horror all rolled into one. You really never know quite whats coming up. And the controls – you press one button to move forward, then when you get to a junction a list of routes flash on the screen – while confusing at first will soon seem second-nature.

But being such a unique experience may prove to be its downfall with the general public; it’s not the sort of game you can just pick up and play. Oh no, there may be many people having a quick go on a mate’s copy and thinking ‘what the hell?’ but perservere for more than an hour and Killer 7’s brilliance shines through.

Indeed, suspend all disbelief and just revel in a fantasticly twisted storyline, revolving around one Harman Smith. Smith is a wheel-chair bound assassin with seven, count ‘em, seven personalities which you get to control through the game. Still with me? Good, cos it gets weirder. Harman’s next job is to track down the insane and dangerous Kun Lan who is the leader of a fanatical cult of monsters known as the ‘Heaven Smile’. These invisible monsters are recognisable only by their distinct laughter – hear some giggling in the shadows and it means it’s time to scan the area with a quick press of the L button. The monsters are not only evil but are carrying a virus that could destroy mankind and it’s up to Smith and his various personas to finish them off.

The imagination evident in the enemy design is amazing. Just as you think you’ve seen the strangest sights your eyes can take Capcom throw another weirder enemy at you. And just wait till you get to the Handsome Men in the later levels, the design is just frequently crazy – you won’t see a generic Orc or Soldier here. Each monster has a different weakpoint, highlighted while in scan mode and it’s very important to learn all of these as soon as possible. Some enemies will just amble towards you if you’re seen, others run at you with explosives buried within their bodies. You just have to work out quickly which of Harman’s personalities are better suited to dispatching each enemy.

The individual skills they possess are used very well, with some brend-bending puzzles especially towards the end. Even the skills are far from feeling generic; big characters are not nessesarily slower yet stronger in this game. And it does feel rewarding to explore each character’s moves and applying them to the right situation is very satisfying. It won’t be long before you find your favourite and no doubt your tactics will revolve around their skills, but the experimentation process is very fun along the way, it all feels so good.Any problems with the game arise mainly from it’s best points. It can be frustrating having to stick to the on-rails shooting, Capcom have produced such a rich and interesting world that it would be nice to explore some of the areas a little deeper.

The game is also very unforgiving, something that again might put people off purchasing it. The bosses and situations can be overcome with practise and a little preserverence but there are some nasty difficulty spikes that are just frustrating. It’s clear this is an adult game, not just because of it’s graphic nature but the themes, story and difficulty will render this unplayable to some, which is not necessarily a bad thing but alienating some of your potential customers isn’t a way to make the bank manager happy. But that is also what makes Killer 7 so refreshing.

Nothing has been made to appeal to the lowest common denominator. The game gives you a fantastic experience but, by God does it make you work for it. It does make the little achievements seems all the more sweeter when you accomplish something and when you have played it to it’s end you will be guaranteed to be satisfied, if a little hungry for more. Can we have a sequel please Mr Mikami?