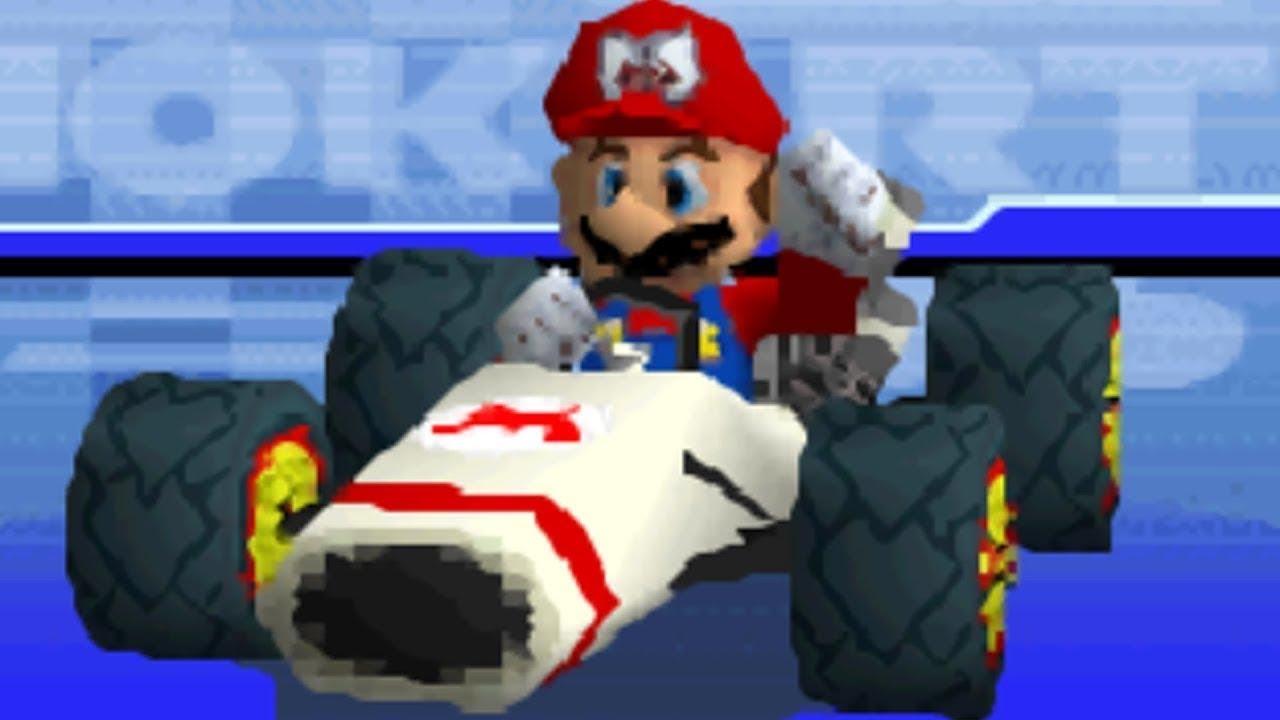 Mario Kart DS hits European stores this week, and we’ve now had enough time to sit down with the final game and deliver our final verdict.

The Mario Kart series is something any Nintendo fan should be familiar with — the series is now over a decade old and has enjoyed great success with its sequels on previous Nintendo systems. But how have Nintendo adapted the series to work with the DS hardware, does it use the system capabilities, is this version such as radical departure from the series roots as was Double Dash, and most importantly is Toad still the most annoying racer within the roster? All these questions are answered below, so sit tight, and have bananas at the ready, Mario Kart DS is here.

The Mario Kart formula was originally mocked as being a risky tactic for Nintendo, but fortunately for us gamers, they pulled it off, and now as we prepare to enjoy the fifth in the series, it’s safe to say that the Mario Kart that we know and love is back and it plays like a dream.

Several Grand-Prix options, as per usual, are open to begin with, and in typical fashion you work your way through the cups, unlocking new ones as you progress. In total, you will end up with an impressive roster of 32 tracks, including new tracks and classic old ones from previous titles including the likes of Choco Mountain, Moo Moo Farm, and Baby Park. The Grand Prix yet again is split down into three different classes consisting of 50, 100 and 150cc, with each class providing a greater sense of difficulty and a more intelligent AI from your opponents. Grand Prix is where the main single-player mode lies, but several other modes are included such as Time Trial, Battle, and a new Mission variant, but more on that later.

So what can you expect from the main gameplay offered? The usual suspects are available to choose from, including Mario, Luigi, Peach, Bowser and more, and again, as you progress, you will unlock more secret characters, and karts to match. In-game, items (weapons) have seen a little tweak, they no longer are based on your character duo, like they were in Double Dash and now each character has an item statistic, and those with higher stats get better items for example. The handling is refined and is beautifully tight while simple, cornering is easy to execute, as is power sliding. All the classic items return including two new items, one being a large Bullet Bill, which shoots you towards the front of the pack taking out anybody or anything along the way, and the other being a squid which squirts oil over the screens of any players in front of you, damaging their vision, requiring the player to glance at the bottom screen and use the track map. The track map can also be used to see upcoming weapons or those red shells coming right at you! These new weapons along with the old classics offer a superb range and variety when it comes to taking out your opponents and will no doubt put a smile on your face.

As mentioned earlier, this version of Mario Kart has a new mode which goes by the name of ‘Mission’, this features several objective-based mini-games in which you must reach a certain goal, for example, drive through gates in order, collect coins in a time limit and so on. These are split into groups separated by a boss battle. These Missions, while a large departure from anything seen before in the series, offer a nice enjoyable alternative to racing or battling, and can improve your driving skills, while giving you a break from the main heat of the game, but be warned they get tough!

The multiplayer is where the lifespan lies, what with the classic battle mode returning. In this version, while playing a Balloon Battle each character has 5 balloons, and they are kept in an on-screen inventory, to get them out on the back of your kart, blow on your mic, and they inflate! Balloon Battle is addictive as ever, and the inclusion of Block Fort makes me all the merrier. Another new mode to the game is the battle variant named, Shine Runners, in which you have to collect the most number of shines within a given time. This plays somewhat similar to the Shine mode in Double Dash, but time plays a more important role. Online although limited provides a way for you to always have real people to play with, which is always more enjoyable than the games AI, the WiFi Connection is effortlessly done, and incredibly simple.

The new modes along with the new tracks, characters items, and online play, make this one of the most engaging games of Mario Kart yet, which is incredibly balanced, a joy to play, and will become an instant hit on the DS. Nintendo has made the series fresh again, without tweaking the core that made the original so awesome.

An instant classic, which cannot be missed, and will keep you coming back for more time and time again.