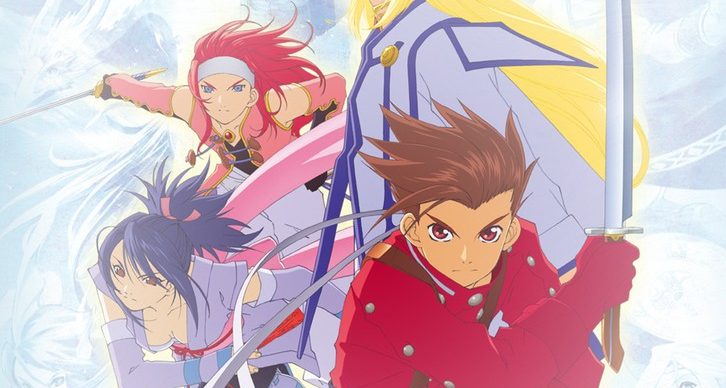 Before I begin gushing about how fantastic Tales of Symphonia is I’ve just got to tell you that this is my all time favourite game, ever. I will, however, try to remain neutral throughout this review as much as possible!

Remember a time when Nintendo consoles were the place to be to get your RPG fix? You’ll have to go back quite a few years, back to the days of the SNES in fact. Nintendo’s stellar console was where many of the greatest RPG franchises called home for many a year.

Among the Final Fantasy series, the first Star Ocean, and the likes of the phenomenal Dragon Quest games, was a first rate RPG from Namco: Tales of Phantasia. It was only released in Japan and came on the biggest SNES cart ever (even bigger than Pilotwings 64 incidentally)! This was probably due more to the three-minute long vocal piece in the game’s intro, but the game itself was a very big and long experience also.

Now we have the latest in the series, Tales of Symphonia — it’s exclusive (in the U.S. and Europe, for now) to the Nintendo GameCube. The series has always combined staple RPG elements like levelling up, villages in peril etc, but its main selling point has been its unique combat system.

It’s played in real-time, although you can still give your CPU controlled party instructions throughout the fights. Tales of Symphonia has the best battle system of the series, in fact it’s probably the best system in any RPG ever. I’ve never liked random battles, which is great as Tales of Symphonia has all but eliminated them, instead you can see your enemies (represented mostly as black blobs which look curiously like an Xbox!) and can choose whether to fight or avoid them. I personally always chose to fight – such is the greatness of the battle system. It feels almost like a 2D beat-em-up in the way you initially find yourself button mashing to try and find the best combo moves.

It’s not long before the hidden depth of the system reveals itself: different moves can be linked; elemental damage plays a part in boss battles; and the U-attack (which is started by filling a meter by getting combos) allows you to use one of each character’s special moves in one go culminating in a huge combo (my highest is 82). The main advantage of a U-Attack (learnt after a couple of hours) is that it can stop an enemy’s attack or spell, it also won’t use any of your magic bar (in this case its called TP). Each special move, which you assign to a direction and the ‘B’ button, uses a set amount of TP. TP can be gained by hitting your opponents, meaning you are encouraged to try and get as many combos as possible. You also get a small amount of HP and TP at the end of each fight, which is handy!

Battles aren’t everything though, graphics play an important part in Tales of Symphonia. The presentation is a bit of a mixed bag really: unfortunately the animation in some of the cut-scenes really don’t help drive the dialogue and can look very out of place; also the overworld is very sparse, with pop-up, fogging and a general lack of polygons across the environment. This is a real shame as it is in stark contrast to the rest of the game. Villages and towns are awash with colour and splendid detail. They almost look as if they are hand-painted and seeing them in action, with grass softly blowing in the wind, snow falling gracefully, and windmills turning far in the distance, was enough to almost move me to tears in places.

The bosses are also tremendous with great detail paid to all but a few (Volt looks like a Metroid) and even the field enemies are well designed, highly colourful and impressively modelled. The fact that you can view every enemy you face in the game is a big fat bonus as far as I’m concerned, particularly as it is a side quest in itself. The cell-shaded characters are very detailed and the cell lines look almost like thick brushstrokes and were designed by renowned Manga artist Kosuke Fujishima.

The music compliments the graphics perfectly with some incredibly ambient tunes to listen as you go through. Stand out themes include those for the towns of Flanoir, Luin and Asgard. Each character also has his or her own theme too which play during the cut scenes. While it works brilliantly inmost places there are a few character’s themes that can really destroy the delicate atmosphere built up by the story in certain scenes (Regal’s is played during one particularly sensitive scene, virtually ruining it). But overall this is one of the best soundtracks I’ve heard on the cube and maybe one of my personal favourites ever, it’s one of the only soundtracks I’ve actually endeavoured to buy too.

Also of note is the voice acting, which is surprisingly good. There are a few regular anime voice artists in there plus Cam Clarke voice of Solid Snake and Die Fledermaus from The Tick, amongst others. Lloyd, Raine and Kratos (Cam’s voice) are the better performed and you may find Zelos and Genis a little grating after a while. My only gripe is that the voice-overs aren’t in every major scene; there are even times when a scene is only half completed. It’s little wonder that every single conversation is voiced (seeing as there are ten thousand lines of dialogue) but the translators could have picked out more appropriate scenes to voice.

While they do adhere to the usual reluctant hero, moody mercenary and princess character types we’ve grown to expect in RPGs, they quickly become familiar, even endearing in parts and you get a real sense that they have a deep personality. This feeling is helped by the story, which I’ll touch upon quickly here.

Many have criticised Tales of Symphonia for its story, but as this is the first RPG I’ve played right through I can’t comment on whether its too similar to others. All I can say is that I really enjoyed it. The story follows young Lloyd Irving who along with his best friend Genis join their friend on a quest to regenerate their dying world. Legend has it the Chosen One, Collette, can save the land by reawakening the long dormant Goddess Martel. Along the way you meet the complicated Mercenary Kratos, Lloyd and Genis’ teacher Raine (also Genis’ sister) the mysterious Ninja Assassin Sheena and many more.

I really felt driven to complete dungeons to divulge more plot; listened intently to cut-scenes and skits (optional text-only conversations) to gain an insight into a characters motives; and wondered as I entered a new town just what was going to be revealed next. The twists and turns left me astonished and only a few points seemed underplayed, predictable or weird. It took me 25 hours to get to the first big twist and what a twist it was! I did have a bit of a problem taking everything in towards the end but on my second go through it all made perfect sense. The story and indeed the entire game has a great pace to it; sections of the game can be completed in an hour or two making it perfect for busy gamers to fit into their schedule. I would recommend putting aside as many real life commitments as possible as this game can take upward of 50 hours to get through first time round, and trust me you’ll want to play it at least once more!

I’ll leave this mammoth review with a huge recommendation. If you have been starved of RPGs on the GameCube and need your fix then please, please buy Tales of Symphonia.

Show Namco that their games do sell on Nintendo systems. You will not regret it I can assure you.